THE BIG LIE OF ECONOMICS: INFLATIONGATE

All Economics is based on the false premise that "interest fights inflation" when the truth is that "interest causes inflation." Almost everyday in every financial story of every newspaper and radio or television program, it is repeated over and over the interest fights inflation. They all agree that interest causes unemployment but all have been conditioned to believe that it is necessary to fight inflation. "Inflation is coming so we'll have to raise interest rates" is hypnotically chanted like a mantra.

The word "mort-gage" is derived from the French word "mort" meaning "death" and "gage" meaning "gamble". Bankers create the money supply when they make loans. Producers are forced to gamble by borrowing newly created Principal(P) to pay for production costs and then inflating their prices to recuperate both the created Principal and the non-created Interest (P+I) from their sales. Because total goods priced at (P+I) can never be sold when consumers only have P dollars available, a minimum amount of goods must remain unsold and a minimum number of producers must fail and suffer foreclosure. The economist Keynes likened the mort-gage death-gamble to the game of musical chairs. Just as there are insufficient chairs for all to survive the musical chairs death-gamble, so too, there is insufficient money P for all to repay (P+I) and survive the mort-gage death-gamble. 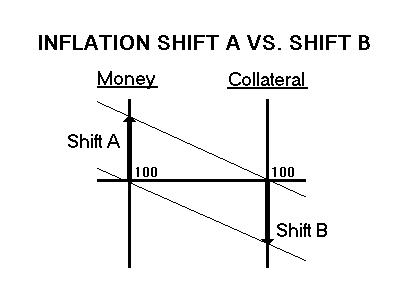 The equation for the minimum inflation (J) we must suffer is the same as the equation for unemployment (U) because the fraction of the people foreclosed on is the fraction of collateral confiscated. Though we are led to believe that inflation is caused by an increase in the money chasing the goods (Shift A), actually, it is caused by a decrease in the collateral backing up the money (Shift B) due to foreclosures. Though both inflations shifts feel the same, the graph shows inflation is not the inverse function of interest, it is the direct function exposing the Big Lie that interest fights inflation. You can test this out yourself with the Game Theory example at the end of the LETS Engineering Mathematics at http://SmartestMan.Ca/bankmath

Every economist in world has been taught that inflation is Shift A. No Economics curriculum mentions the other possibility, Shift B. This is not accidental. Yet when most people who have not been conditioned by Economics studies are asked whether prices will go up or down when the interest rates are raised, they are quick to agree that a merchant must pass on increased interest costs by raising prices. And yet, very few notice that this logical conclusion that interest is passed on in higher prices is in direct contradiction to the Big Lie which is repeated over and over in all our media and Economics text-books that interest reduces prices.

I/(P+I) has been called the Miracle Equation because it exposes the Big Lie of Economics that inflation is the inverse function of the interest rate when it is actually a direct function. Letting I=0 eliminates both involuntary unemployment and inflation! So, if interest does not fight inflation but actually causes inflation, then there is no logical reason for keeping interest in our banking system's computer programs. This explains why the LETS interest-free time-based banking system software suffers no inflation and is the perfect model of how our international banking system should someday operate.

Our mission therefore is to expose the Big Lie of Economics for our friends and neighbors. Every time you read the Big Lie in your newspaper, point it out. Every time you hear it on the radio or television, point it out. There are opportunities to expose the Big Lie of Economics almost every day. We must either work to install an interest-free banking system or continue to suffer the consequences of poverty we've been suffering throughout the history of humankind.